After visiting Kona for the Ironman World Championships in 2013 the visions I’d often had of Hawaii in winter daydreams were cemented.

Quiet little towns filled with surfers, fresh seafood and acai bowls at local mom and pop restaurants overlooking blue waves crashing upon the black volcano shores. I couldn’t wait to go back and take my husband to show him this paradise!

Luckily 2014 provided just such an opportunity thanks to the Honolulu Marathon, but oh we did so much more than run!

For those who aren’t familiar, Kona is on the BIG island of Hawaii, while Honolulu is on Oahu. Here’s just a snippet to breakdown how the islands are different because YES they are different!

Oahu
Oahu has a split personality of sorts, which makes it an easy place to satisfy the whole family. While Honolulu is every inch a modern city, offering world-class shops and restaurants, while there still remains many scenic areas and beautiful quiet coastline to explore.

Big Island
Nature lovers will delight in what the big island has to offer, from active volcanoes to beautiful beaches.

HONOLULU
Thus, arriving in bustling downtown Waikiki was a shock to my system after the low key life of Kona.

All of the amazing sunsets, soft white beaches and mountain views remained, but alongside Louis Vuitton, Channel and a mass of tourists in every direction. What I lost in small town charm was replaced by high quality hotels and immediate access to nearly anything that you might need, including tours! 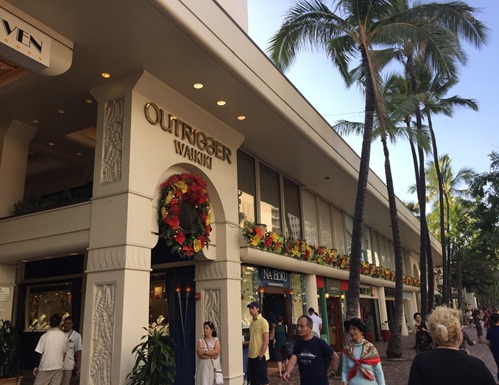 The great thing about walking in to a place like the Outrigger Waiki is the immediate feeling that you can set your trouble aside and start vacation! The singers, the leis, the courteous staff and of course.. 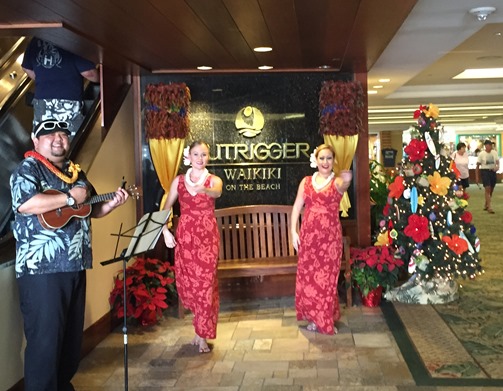 the ocean, which we were lucky enough to see from our room! Of course with weather this gorgeous and so much to see, we didn’t spend much time there, but it was a great way to start each day sipping some hot tea and watching as the beach slowly filled up with surfers, swimmers and loungers. 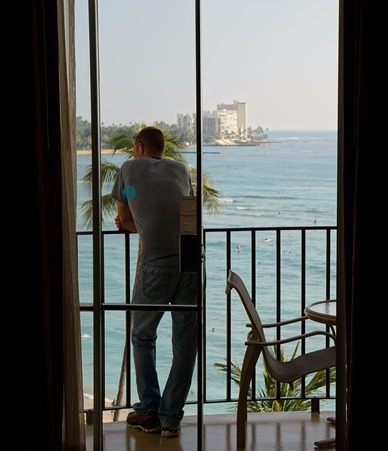 On the fourth day of our vacation, we actually moved to a second Outrigger property called Outrigger on the Reef and I was tearful about leaving our ocean view room until I encountered our new “city view”. Which was such an amazing reminder that in so few places can you be next to the ocean with mountain views! 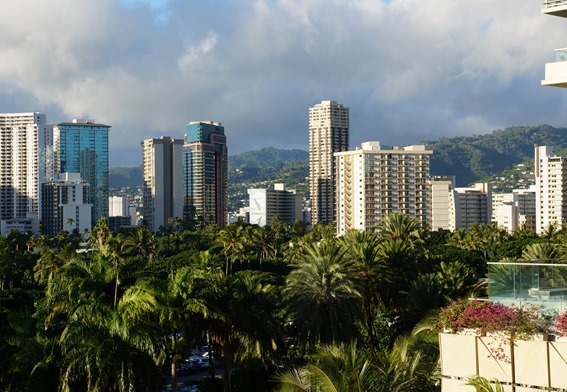 Enough with downtown, let’s move on to everything else we loved about our time in Honolulu, starting with you guessed it…nature!

DIAMOND HEAD
Lucky for me David happens to enjoy exploring on foot nearly as much as I do…so with visions of Diamond Head beckoning to us from the Outrigger Waikiki we set off ready to walk to the infamous climb. 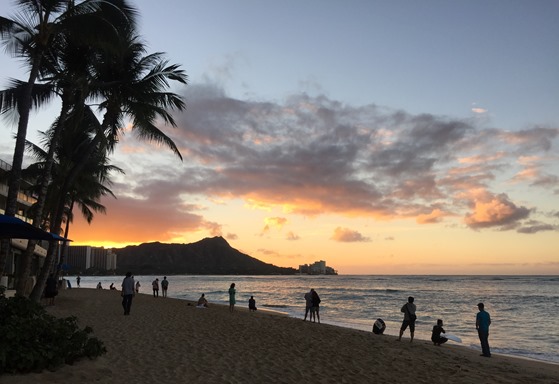 Being who we are, we ended up taking a few detours to look at things and walked over 5 miles before reaching the summit! Even with a marathon just days away it was worth it for the spectacular views.

You may recognize the crater from pictures of Honolulu – it is a very well known landmark.  This dynamic hike starts in the belly of an ancient volcano and goes 560 ft up to the top of crater rim. 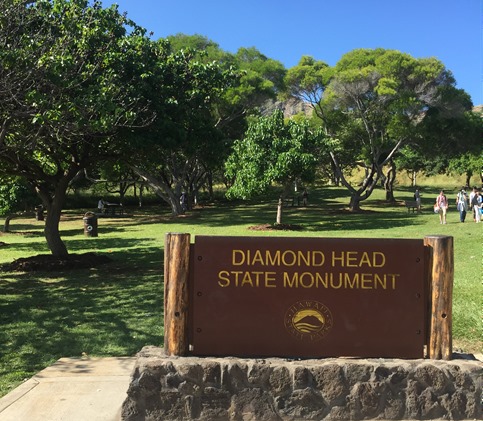 This volcano, which has been dormant for over a century, is part of a volcanic chain tat dates back 500,000 years.  You’ll pass World War II military bunkers as you stroll along the rim of the crater and see the amazing views of Honolulu at the summit. 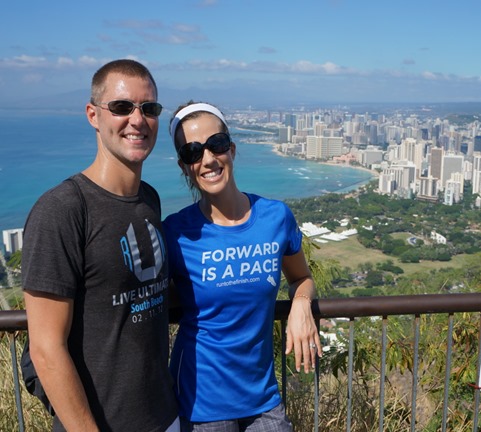 LUAU
Also on the must see-do list is of course a luau!! Most were at least a 1 hour drive with traffic, so we opted to check out the Hilton Rooftop luau which would have the same performers, but be lacking the roasting pig and beach atmosphere.

It ended up raining on us for the entire show, so we were more than pleased to be within walking distance of our hotel when it finished and found the show to still be wonderful. 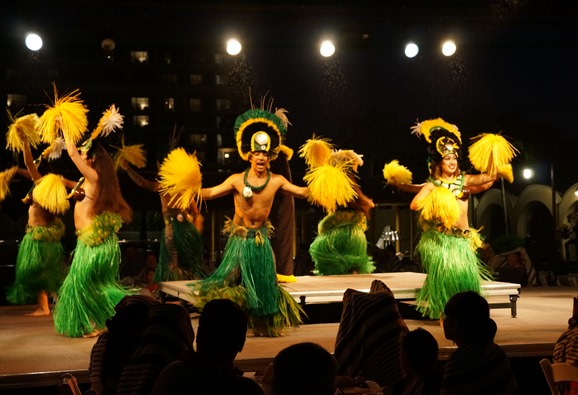 Toady the term “luau” is pretty much synonymous with a large gathering or “party”, but its literal translation is quite different.

Specifically, the term “luau” refers to the leaf of the taro plant, which is commonly served at luaus and is similar in taste and texture to the potato. In fact, the Hawaiian word that literally translates to “party” or “gathering” is actually “paina.” 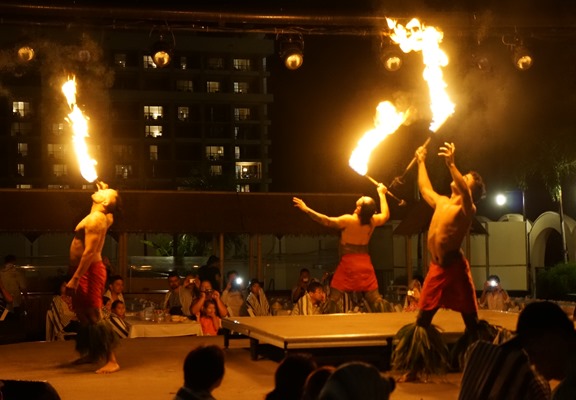 What many people fail to realize is just how much work and dedication goes into learning how to hula dance.

In fact, most hula dancers train for years at schools known as halau; at these training institutions, strict rules and rigorous practice schedules are enforced. 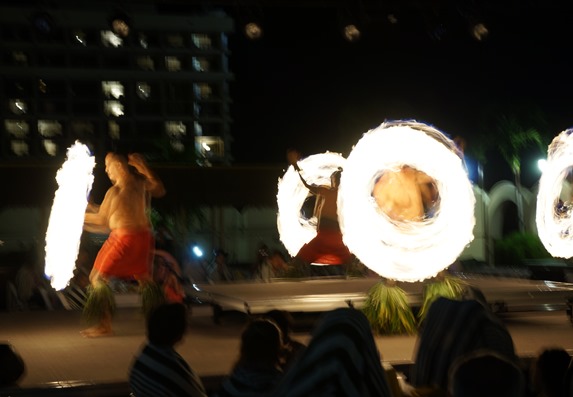 Even with the rain, it was a spectacular show and absolutely worth staying up a bit later a few nights before the big race! If we head back in the future, we’ll make more time to go to one of the beach shows with the full roasting pig and additional cultural center to explore.

Now of course the rest of our time in Honolulu was spent running 26.2 miles and enjoying everything that the marathon had to offer…which meant lots of pool and beach time to recover. We also took a Circle Island Tour and details on that coming up next! 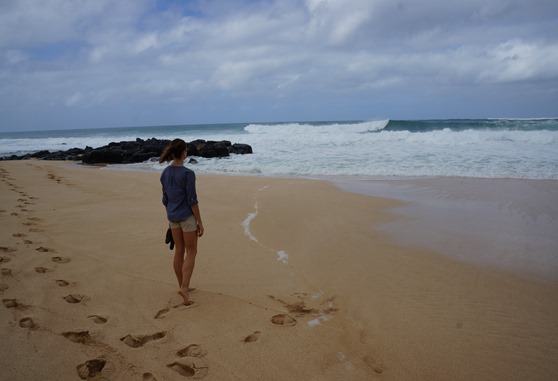 Ready to take charge of creating the life of your dreams? Find inspiration to work from anywhere, travel more and turn your blog in to your income.

Anywhere and everywhere. That's the beauty of being a travel writer...the world is my office.

Looking for someone to transform your digital strategy or to tell your story? I'd love to hear from you, just click Contact in the top bar!